We release an economic forecast for the coming year each January, which is followed by an economic update in August. As we begin to focus our vision on 2020, does it appear that economic conditions in 2019 are taking shape as expected, better than expected, or worse than expected? We are happy to report that other than some softness in residential home prices, all indicators in the Metro Denver region point to an economic expansion that continues at a pace equal to or greater than what was forecasted in January.

The global expansion approached its three-year mark at the end of the first half of 2019. However, the International Monetary Fund (IMF) noted in its latest world economic outlook update that growth remains sluggish and there were several downside risks to the forecast. According to the IMF, risks included ongoing trade tensions and trade uncertainty that were slowing investment activity and weighing on sentiment. Another developing risk is the ability of central banks to support core inflation targets in many advanced and emerging economies. The IMF forecasts global growth will increase 3.2 percent in 2019 and 3.5 percent in 2020.

After posting a 3.1 percent increase in the first quarter of 2019, U.S. GDP growth slowed to a 2 percent annualized rate in the second quarter. Robust growth in personal consumption expenditures (+4.7 percent) in the second quarter was partially offset by a decline in private investment (-6.1 percent). The slower investment activity was reflected by a decline in both nonresidential and residential investment activity. Slower growth in the second quarter was also affected by a growing trade deficit as exports decreased from the first quarter and imports increased. While GDP growth in 2019 is expected to remain slower than the 2.9 percent pace posted in 2018, the outlook for 2019 has been revised upwards from the 2 percent pace originally forecasted in January to 2.3 percent.

Through the first half of 2019, employment growth has slowed both nationally and locally from the rate posted in 2018. Encouragingly, the state’s strong economy and availability of job opportunities continue to influence Colorado’s labor force participation. In June 2019, Colorado’s not seasonally adjusted labor force participation rate continued to trend upward, reaching 70 percent for the first time since October 2011. The state’s rate had dipped as low as 66.4 percent in January 2016. However, slower net migration and low unemployment have dampened employment growth.

Six of seven metropolitan statistical areas (MSAs) in Colorado posted increased employment through the first six months of 2019 compared with the same time in 2018. The Boulder MSA was the fastest growing metro area in Colorado based on preliminary data through the first six months of the year, with employment increasing 2.9 percent based on strength in the area’s tech industry and professional and business services sector. While growth slowed in the Greeley MSA through the first half of 2019, the area still recorded a robust 2.7 percent rate of employment growth year-to-date, higher than the state average of 1.9 percent. Similar rates of growth were recorded in the Fort Collins (+2.7 percent) and Grand Junction (+2.7 percent) MSAs. Employment in the Colorado Springs MSA is 1.9 percent higher than last year as companies seeking a more affordable business location choose the region. The Denver-Aurora-Lakewood MSA posted the second slowest pace of growth through the first half of 2019, with growth falling from 2.5 percent in 2018 to 1.5 percent year-to-date in 2019. Pueblo recorded no growth in employment through the first half of 2019 compared with the same months in 2018. 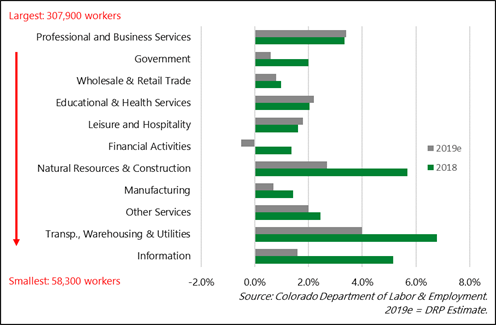 The forecast for employment growth in Metro Denver remains at 1.8 percent in 2019, representing the addition of about 30,000 jobs. Professional and business services and education and health services are expected to be responsible for about 50 percent of the job growth in 2019.

The outlook for the commercial real estate markets remains much the same as had been expected in January with some slight increases in vacancy rates expected by the end of the year, positive rent growth, and robust yet slowing construction activity. The notable exception is that industrial construction activity is on target to reach a new record level in 2019.

Consumption, or consumer activity, is the largest component of U.S. GDP, representing approximately 69 percent of the total. The Consumer Confidence Index tends to be a reasonable indicator of future consumer activity. After a dip in the last quarter of 2018 through the first quarter of 2019, confidence levels appear to be back on an upward trend. While the January–June average Consumer Confidence Index for the U.S. was 0.1 percent lower in 2019 compared with the same time last year, the average Mountain Region Index, which includes Colorado, was 3.5 percent higher. The high index level reflects confident consumers who are spending at a steady pace.

Nationally, total retail trade activity has been increasing at a 2.8 percent pace in 2019, lower than the 4.2 percent growth rate in 2017 and the 4.9 percent increase in 2018. Among the retail sectors, the fastest growth year-to-date has been in non-store retailers (+10.7 percent), food services and drinking places (+4.1 percent), and health and personal care stores (+4.1 percent).

Although data comparable to U.S. retail trade data is no longer available from the Colorado Department of Revenue, sales tax collections in the City and County of Denver and the City of Aurora indicate confident consumers are continuing to spend money. Sales tax collections were up 2.5 percent in Denver for the first three months of the year compared to the same period last year, whereas Aurora activity for the first half of 2019 was 7.2 percent higher than last year.

In 2019, Metro Denver’s residential real estate market has been punctuated by a decline in both home sales and residential construction activity, coinciding with the smallest over-the-year quarterly increase in single-family median home prices since 2012. The number of existing homes sold from January to June 2019 was 2.8 percent lower than sales during the first half of 2018. As predicted in January, this trend is expected to continue through the latter half of the year, resulting in 2019 being the second consecutive year of declining sales following a 5.5 percent decline in 2018. Sales are on target to be about 54,600 home sales in 2019, a decline from the peak of about 59,300 sales in 2017. While inventory remains significantly below levels posted prior to the Great Recession, it appears to be trending upward with 9,520 listings in June 2019, a level not posted since November 2013.

New residential permit activity is on track to post its first annual decline since 2009 as population growth has slowed in the metro region and builders continue to struggle with rising costs and a shortage of workers. Permit activity in the first half of 2019 is nearly 21 percent lower than the same period in 2018, with all property types posting a decline. The number of single-family detached units permitted is down nearly 18 percent, single-family attached units are down 41 percent, and multifamily units are 24 percent lower. Notably, multifamily permit activity is on track to decline for the third consecutive year following a 0.7 percent decline in 2017 and a 5.4 percent decline in 2018.

Home prices have risen rapidly in Metro Denver since 2011, with the median price in the region increasing over-the-year for 31 consecutive quarters through the second quarter of 2019. While growth in Metro Denver’s median single-family home price peaked at 14 percent in 2015, price increases remained robust through 2018, averaging an 8.4 percent increase each year. However, home price appreciation is moderating even faster than expected in the Metro Denver region. In the fourth quarter of 2018, the median price increased just 5.8 percent over-the-year and the pace slowed considerably to 1.2 percent in the first quarter of 2019 and 1.8 percent in the second quarter of the year. The slowing appreciation trend is also reflected in the Case-Shiller home price index where Denver’s index rose just 3.6 percent over-the-year in May 2019, the smallest over-the-year increase in the region’s index since 2012.

The apartment vacancy rate continues to remain stable, fluctuating between 5 percent and 6.4 percent on a quarterly basis since 2016. In the second quarter of 2019, the apartment vacancy rate in Metro Denver was 5 percent. The rate is expected to increase slightly throughout the remainder of the year to an average vacancy rate of 5.5 percent. After double-digit increases in the average apartment rent in 2014 and 2015, fourth quarter apartment rental rates increased 3.7 percent in 2017, 4.3 percent in 2018, and an expected 3 percent in 2019. In the second quarter, the average rental rate for all units ranged from $1,404 per month in Adams County to $1,680 in the Boulder/Broomfield market area, with an average of $1,520 per month throughout Metro Denver.

While hindsight is always 20/20, the expectation for economic activity in Metro Denver in 2019 first put forth in January remains in focus. Employment growth in Metro Denver has slowed to a 1.8 percent pace, reflecting the addition of about 30,000 net new jobs. Labor market conditions have tightened even more than expected, with the unemployment rate averaging 3.1 percent. Commercial real estate markets are sound with slowly increasing vacancy rates and a slight decrease in total construction activity, although industrial construction continues to reach new records. Consumer activity remains healthy, and a notable slowdown in the pace of both for-sale and for-rent housing cost increases is a welcome change for Metro Denver’s current and future residents.